From the start of her career, Esther "ET" Franklin has always known her worth in the workplace.

Even as a recent graduate hitting the job market, she knew what she wanted and made it happen. While most of her classmates were applying to job after job at agency after agency, ET set her sights on just one and was determined to make it work.

Watching TV one day, she saw a 10th Anniversary Special come on for Burrell Advertising, the first ad agency focused on marketing to African Americans and, by then, the largest black-owned ad agency in the country. ET hadn’t heard of the Chicago-native agency before, and mesmerized, she picked up the phone.

She asked to speak to the head of research, and once connected, asked if she could come in for an interview.

He asked her, “Who are you to call me and ask for an interview over the phone?”

“I just want to come in for an interview,” she said.

And she got the job.

Rising up from a research analyst at Burrell to current President of Global Strategy & Cultural Fluency at Spark Foundry, ET has had years of leadership roles with some of the biggest names in advertising. Through all this, she’s learned you won’t get anywhere in the industry without three critical traits:

“You've got to know, you've got to want it,” ET said, “and you can't let anyone or anything deter you from your want.”

She made her way up through a handful of agencies, from Leo Burnett to Starcom and Publicis Media. But when ET was an executive vice president at Publicis, she hit a point where she knew she needed a change, but didn’t know where to go or what role she wanted to be. All the opportunities being offered to her were things she had done before; she didn’t want to go back into diversity work, and she wanted a change from experience strategy.

So, she wrote a letter. A letter of re-introduction.

Because of her letter, she was able to land a new job, in a new role, at a new company where she still works today.

Because of her tenacity, she was able to continue moving forward.

Right: The intro & outro of ET's re-introduction letters (yes, it was us who added the fun colorful outlines).

“Shit is going to happen along the way, the whole way… The ability to bounce back and get back to what you saw for yourself and what you want to be is going to be hugely important.”

Sometimes, we have to get back up even when it’s the people we trust that knock us down. ET learned this when she unwillingly entered into a toxic mentoring relationship with someone who once vouched for her and had her back in the workplace.

It all started by accident.

As she was going about her usual errands to the fax and copy machines one day, she discovered a memo left behind by someone, and it was written about her. The note came from one of her coworkers, who was defending ET’s work to another associate — namely, the associate that hired ET.

“I was just devastated,” ET said. “That was such a shock. I had no clue. I was like, ‘How do I think about this…’ So it made me pay attention differently.”

When ET decided she wanted to get promoted, she knew that meant sitting down with her manager (aka that same associate) and seeing what she needed to do. But every time their conversations ended, she’d realize her questions hadn’t been answered.

“She was such a force; she was engaging and just had a lot of conversation and I didn't have the skills, or maybe the confidence, to say, 'Wait a minute, you're not answering my questions – you're talking a lot, but my questions aren't getting answered.’

She never had to deal with anything like this before, and she didn’t know what to do. Work was miserable and she’d come home crying in frustration.

After a while, she said her husband told her, “You know what, it's either them or me. Because we're having this conversation over and over and it's not going anywhere, so what are you doing?" 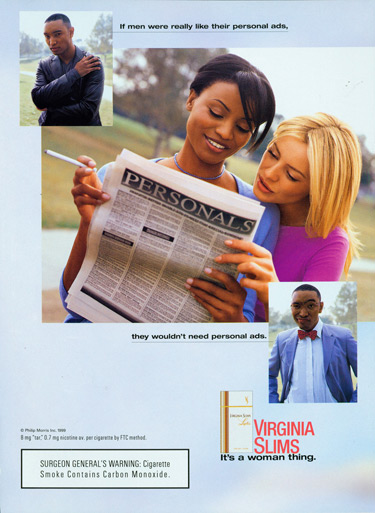 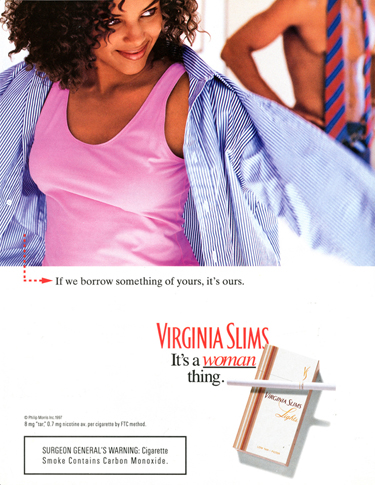 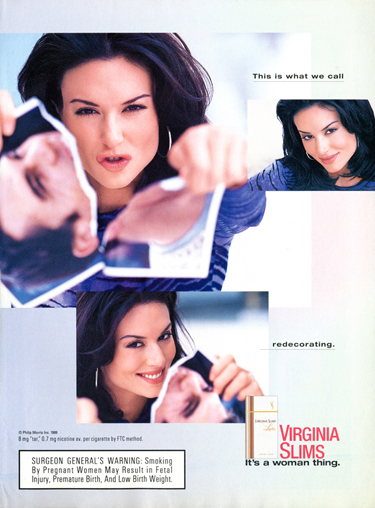 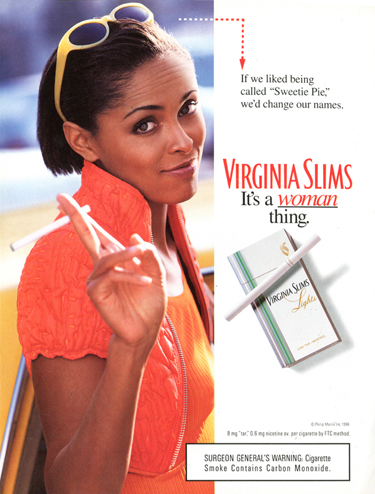 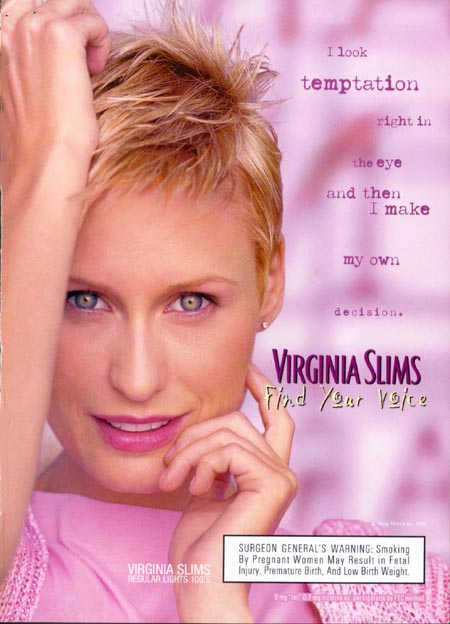 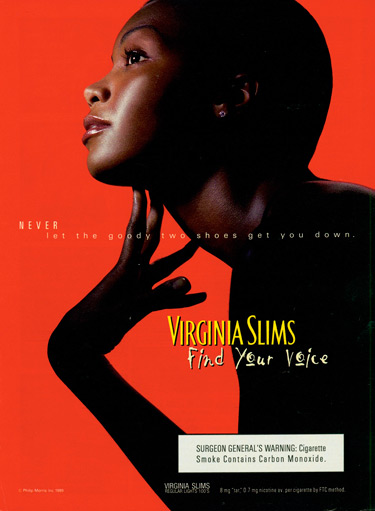 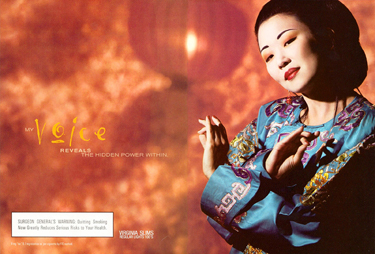 His words pushed her to put a plan together. She put a meeting on her boss’s calendar, and went into it with three specific questions. Regardless of where the conversation goes, ET was not going to leave without an answer to her questions.

Left: ET worked on various Virginia Slims campaigns while she was VP planning director for Marlboro USA at Leo Burnett.

“And that kind of changed the trajectory, because I was able to push back and say, 'Okay, that's great, but coming back to this question – what is the answer to this question?' And that was a point in our relationship when we both realized that things were going to change.”

At one point, she remembers her manager telling her, “You're working on a large account and you're doing more than you ever thought you would be doing…” to which ET replied: “But there's more and bigger things for me to do.”

“It's an ever-evolving world, and if you're not curious and excited about what's new or next, it's not the right industry.”

As the industry has evolved, ET has evolved alongside it. Just like she landed her first job by forging her own path, she's continued to create her own destiny by designing the very roles & responsibilities that she's filled at agencies.

Whether it was bringing account planning into Starcom or founding trend-monitoring programs like 20Twenty Vision at Leo Burnett, ET has shaped and formed the future of the industry by her direct actions and clever curiosity aimed at uncovering “what’s next” in advertising.

While at Leo Burnett, ET was also a part of the formation of LeoShe. Founded over 20 years ago, the group focused on the notion that “the womxn” has a different experience than “the man”; she does things differently, things impact her life differently, so ad campaigns targeting her needed to be done differently – that lens needed to shine through.

ET had a role in LeoShe to voice the cultural perspective of black womxn, to ensure that they were part of the conversation. The hope is that things have changed by now, that teams don’t have to rely on one womxn of color to represent all of a minority... but unfortunately, that's still a battle being fought.

Nevertheless, ET was a valued leader on the team and was proud to be part of it, and then one way or another, all of a sudden… it ended her up on Oprah.

Above: ET discusses LeoShe's research on beauty myths on The Oprah Winfrey Show.

A former Leo Burnett coworker was working on Oprah’s team at the time, and she mentioned to LeoShe that the award-winning TV show host wanted to do an upcoming special on womxn and beauty. The group was invited to the studio to share their thoughts with the programmers, but while they were waiting for the meeting to start, a furry friend trotted in.

ET started to play with the dog, and within a few minutes of giving it pets and scratches, up walked the dog’s owner — none other than Oprah herself.

The media mogul was immediately drawn to ET, and soon after chose her to represent LeoShe on the show.

Next thing ET knew, she was able to add “Oprah Winfrey Show contributor” to her growing list of accomplishments.

“Leadership is not a state of comfort.”

With years of experience leading thought-provoking discussions and advertising initiatives around gender, race and cultural identities, ET now has one main thing on her mind: her legacy.

How will her impact help others? Who will fill her shoes? And do they have what they need to get there?

I think about that a lot,” ET said. “and I don't see enough candidates that would be viable to step into my shoes. I have nothing against white men – they're great – but at the same time, I don't want to leave and a white man steps into my shoes.

Below: ET was behind a campaign called "The Power of One Voice" for the Ad Council & National Underground Railroad Freedom Center, which encouraged people to speak out against racial stereotyping.

“It's hard to get these roles. It's hard to stay in them. And I want to make sure that womxn and womxn of color have a fair shot for getting to the same level that I've been able to get to.”

So she’s doing what she's always done: leading by nature, whether those who will follow her know her name or not.

But she’s been quick to notice that leadership in our modern world is not how it’s always been.

ET explained to Adspire that in today’s environment, where everything is disruptive, so is leadership. Leadership is not a state of comfort.

To be a successful leader that can solve complex problems, she shared, one has to be comfortable with exploring new problem-solving models and bringing people with diverse opinions into the mix.

“For me, I need people that are high functioning, that are highly experienced. So they're going to come with their own point of view, their own style, their own presence and persona, and you've got to be able to manage that, not stifle it.” ET said, “Focus it in the right direction, but let it be what it's going to be.”

Albeit difficult, ET has proven to be one damn great leader, and she understands the magic that happens when you bring a mix of highly-functioning, highly-experienced, and highly-unique minds into a room.

Why? Because she does it every day.